Transitioning from Divisional Barrel Racing to Rodeo with Nicole Love 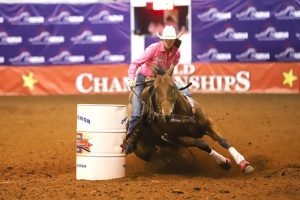 Nicole Love and JL Josie Bar are a dominant force in the NBHA, and recently Love has been seasoning “Josie” at rodeos. They are pictured placing second at the 2018 NBHA Open World Championships with a 14.746. Photo by Tammy Sronce.

She says sometimes one of the biggest adjustments for a divisional horse is learning how to run on rodeo ground, especially for aggressive, turny horses.

“Josie’s taking to them pretty good; she was third at West Monroe [in 2018],” Love said. “She’s got a little bit to learn about different ground, because she’s got this mentality about her where she’s like, “How fast can I run today and how fast can I turn?” On rodeo ground, that’s not the safest plan. She’s had a little trouble with some rodeo ground, but she’s getting better with it. She’s used to manicured barrel racing ground, put-a-lot-of-effort-into-it ground to run on. She’s coming around.”

When introducing a horse to running in rodeos, Love suggests researching specific arenas and asking around about the ground conditions to be sure it will suit your horse. While your horse does need to learn to make adjustments to keep you both safe on ground that may not hold up, you don’t want to set your horse up for injury or failure when you begin taking it to rodeos—especially a young horse.

“I look up a lot of arenas I go to make sure it’ll suit her and that she won’t hurt herself trying too hard,” Love said. “She’s getting a lot better at it all. I think she’ll like the rodeos, and she’ll be plenty fast for them.”

Entering in slack—a group of competitors who run before or after the rodeo performance, since perfs are typically capped around 10–15 riders—will help get your horse used to the environment of a rodeo without a screaming crowd, loud music, rodeo announcers or other factors that might upset an inexperienced horse. Love says even in slack, be prepared for your horse to look around and ride confidently to make adjustments. However, some horses naturally feed off the energy in a rodeo performance—Josie sometimes runs better in performances for Love—so be observant of how your horse responds to different environments and enter accordingly.

“We went to the Stockyards [one weekend] and ran in slack the first night, and she looked at everything—everything!” Love said with a laugh. “I was like there’s nothing in here to look at; this is why we ran in slack! I thought well heck with it, she ran kind of slow in the slack, so it’s all or nothing, we’re going to run in the perf. She ran in there, she didn’t look at nothing, and she made a good, smooth little run. She won it, and I expected her to look at everybody. When the crowd is eye-level with her, she’ll throw her ears up and look at everybody, so she prefers those tall walls where she can’t see anybody. I still like to run in slack with her. She goes a little faster in slack, because there are some things in perfs that make her throw her ears up and she’ll put the brakes on a bit. If I draw up in slack, I don’t complain.”

Factors both inside and outside the arena present a host of fearful obstacles for a “jackpot horse” at a rodeo—ropes, cattle, bulls, bucking chutes, loud music, bright lights, specialty acts, grand entries, flags, fireworks, loose children, and more.

“Josie went to the Professional Cowboys Rodeo Association Finals—her first actual rodeo finals—and it was a little overwhelming the first two rounds, but she got over it and was good after that,” Love said. “She doesn’t really like ropes; she’s not into the ropers swinging their ropes around. She’ll leave the county on that one; she ain’t about that. We sit around them and let them swing their ropes, and she kind of gets over it. She’s gotten better, but she still doesn’t like it. You can’t just swing a rope while she’s tied up to the trailer; she just won’t have it.”

Love utilizes grand entries before a rodeo to let Josie see the pen and chutes and settle into the noise and energy of the rodeo.

“I take her in grand entries at the amateur rodeos, and that helps her to be around all the racket, and the ropers are still swinging their ropes,” Love said. “She’s matured a lot to it. Some of the grand entries are a lot more…like the one we went into at the PCRA Finals, there’s about 1,500 kids who came in for a matinee perf, so with all those screaming kids with the high-pitched screams, she was shaking so hard her legs were jerking. I was like ‘Oh my gosh I know it’s cold outside but wow!’ The last time we went in, I kind of felt bad making her go in the fourth time, because it’s four rounds so four grand entries, so I felt bad but I’m like, ‘We’ve got to get over this, you can’t get scared because this is what you’re about to run into.’ I think taking her in the grand entries and around the amateur rodeos near home is what’s really helped her.”

Your horse isn’t the only one who needs preparation for the bigger stage of a rodeo arena. Love says even she sometimes gets intimidated running against the professional rodeo cowgirls. Keeping your run in perspective and remaining in a calm mental state will help both you and your horse find success under the bright lights of professional rodeo.

“I like rodeos, but it can be a little intimidating going there with all the bigger names, and you’re like, ‘Oh boy, I hope we do good,’” Love said with a laugh. “It really doesn’t bother me too bad, but I just try not to think about it. I go in there, run my horse and try not to have my expectations too high of what I think should happen. I just go in there with a ‘There’s always another barrel race’ attitude—this isn’t my last one, and no matter what, it’s okay. I try and make the smoothest run possible.”