Another PA NBHA State Finals is in the rearview mirror. What a great weekend! The weather was fabulous, and the turnout was awesome! Once again, the hospitality from the Jeff Keeney Family and Diamond 7 Arena was off the charts. I can’t thank all our sponsors enough for all they provided in such a trying year. Our barrel sponsors, TLC Farms & Rehabilitation Center, and another major sponsor, Lewistown Cabinets always support us for which we are grateful.

Friday night’s open 4D round one winner was Doug Kerstetter on a new horse, Fury on the Run with a 14.706. Gretchen Meagher on Easy Cool Whip was our 2D winner. Jennifer Silvis on her ever consistent, Jose’s Lucky Sun, took the 3D win. In the 4D, we had co-winners, Barb Huey on Schofeild’s Heather, and Sherri Robertson on Dukle.

Saturday morning’s competition began with our Peewee Championship run which was won by Charley DeHaven. We want to offer a big congratulations to all the other peewee riders as well.
In the second round of the Open competition, Laura Trumpower and her great horse, Chiseled in Gold, won the 1D. Jennifer Silvis continued her hot weekend by claiming the 2D win. Sierra Weaver and Hughes Daddy’s Girl won the 3D. Our 4D winner was Mariah Arabia on Wicked.

Saturday afternoon, we had our Senior Championship run which was won with a quick 15.035 by Shana Grow and Smokin Pay Day. Our 2D senior Champion was Sherri Robertson and Duke with a 16.142. Ginny Bowman and Bud’s The Quarterback ran a 17.074 to claim the 3D Championship. All our winners received Montana Silversmith buckles, reserve was breast collars by Custom Tack. 3rd place received spur straps by Red Eagle Creations, and 4th received reins donated by Can Chasers Unlimited.

Following our Seniors were the youth riders. Jess Shafranich continued her hot weekend by claiming the 1D Championship on Whatever Fires You Up with a 14.832. Lexi Zola on Baloo claimed the 2D with a 15.902. Winning the 3D was the birthday girl, Bella Hebron and her first ever championship on Captain Gooseberry with a 17.085. All of our winners received Montana Silversmith buckles, breast collars by Custom Tack, spur straps by Red Eagle Creations, and 4th was trophy reins donated by Can Chasers Unlimited.

After our award ceremony, we had the always popular potluck dinner and cornhole tournament. All I can say is if you didn’t find something good to eat, it was your fault!

Sunday morning brought us to our Championship Short go in the open. After the dust settled, Jess Shafranich continued her dominance on the weekend by winning the 1D championship with a 14.851. Heather Gawne and Te Pan Jet claimed the 2D Championship with a 15.352. Kendra Feaser on her young horse Nookie won their first ever Championship taking the 3D title with a 15.864. Levi Leach and Experiment 626 claimed the 4D title with a 16.904. Our first-place winners received NBHA Wildcards and trophy saddles by Corriente Saddlery. Second was Montana Silversmith buckles. 3rd place received breast collars by Custom Tack. 4th, wither straps by Custom Tack and 5th, custom reins donated by Can Chasers Unlimited.

I would like to thank all who came and supported us as well as all of the great sponsors. A huge shout out to all my help: announcer, computer help, office help, tractor drivers, barrel setters, gate help, and Diamond 7 arena for a great weekend. Hope to see everyone at next year’s PA State Finals! 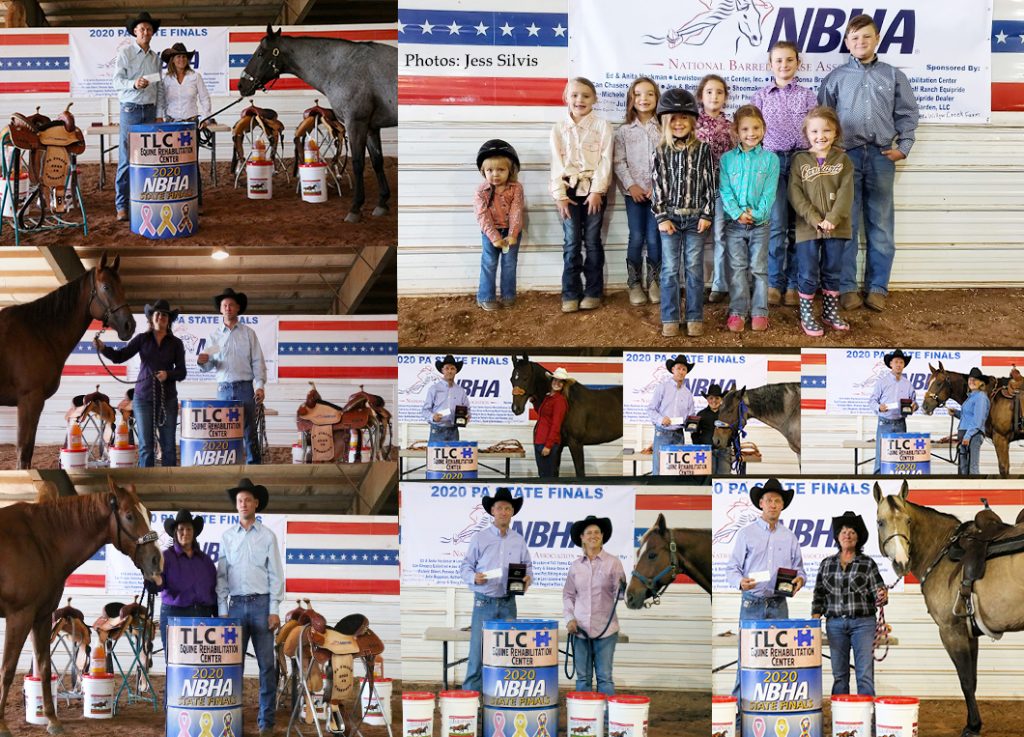