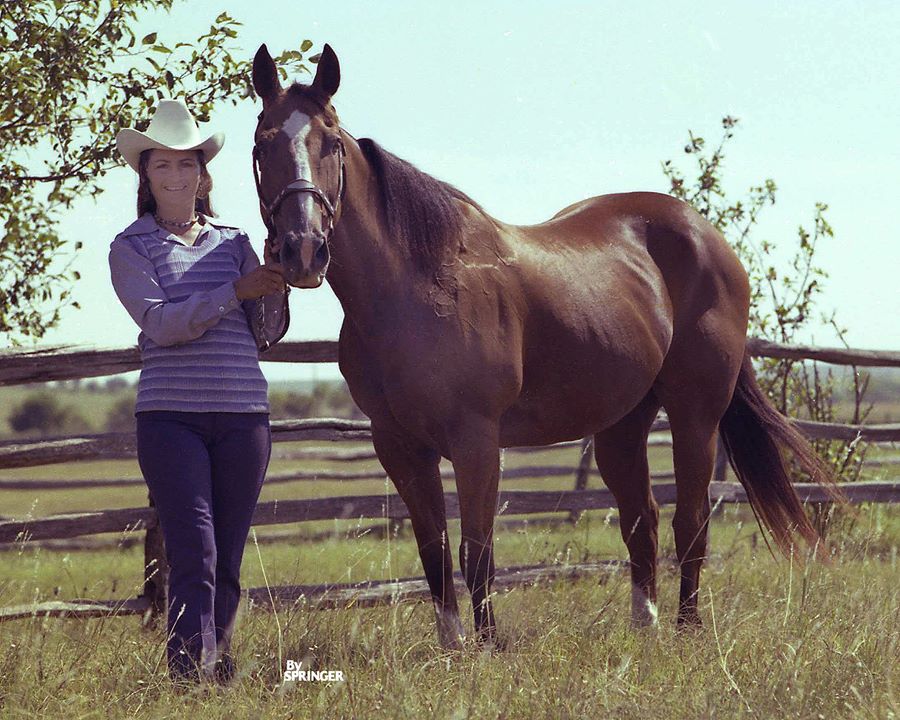 Above: Martha with her first and foremost winner Cebe Reed, who took her to four championships in scorched-earth style in the Texas Barrel Racing Association before she joined the Girl’s Rodeo Association (later the WPRA). “Cebe” spent his prime years in the amateur ranks, winning Martha enough money to allow her to quit her full-time job as a secretary and join the professional ranks. He continued to give it his all and took her to her first NFR in 1968.

The 2020 ProRodeo Hall of Fame inductees announced April 20 will mark the 42nd annual induction. A total of eight are inducted, including one representative from the Women’s Professional Rodeo Association.

Martha represents only the fourth class of WPRA members in the ProRodeo Hall of Fame since women began being included in 2017.

Through her love of the sport of rodeo, Martha not only became a world champion barrel racer but got the opportunity to compete in rodeo at the 1988 Winter Olympic Games in Calgary, Alberta, Canada, that pitted the United States against Canada. Josey won an individual bronze medal and helped Team USA capture the team title.

Martha, who currently resides in Karnack, Texas, qualified for the National Finals Rodeo 11 times on four different horses across a span of four decades. She won her 1980 world title on Sonny Bit O’Both, the same year the duo also won the American Quarter Horse Association World Championship, a feat that hasn’t been matched to date.

“I am so excited and just don’t know what to say. I am in shock,” the 82-year-old Martha said. “I have received some great honors in the past, but this is among the very highest. It is a true honor to be included in the ProRodeo Hall of Fame in the WPRA category alongside so many great athletes and personnel. I thought four years ago when the WPRA inducted their first class it was just magnificent, and to get the call today is just wonderful. I am so honored.”

Not only did she make a name for herself in the arena, Martha also has given back to the sport through her countless clinics. She and husband R.E. Josey started conducting barrel racing clinics in 1967 at their Texas ranch. Several of today’s world champions credit Martha with helping them achieve their goals. Her clinics have grown through the years to average more than 1,500 students annually, with students as young as five and some into their 80s. Normally every May on Mother’s Day weekend, the couple hosts the Martha Josey Junior World Championship event at their ranch, which is now WPRA sanctioned, as well as the Josey Reunion Barrel Race.

In addition, the Joseys have been involved in creating innovative barrel racing saddles, pads, protective boots, knot reins and combination bits. They believe the result has been increased safety and barrel racing skills for many barrel racers across the United States.

Martha was also the queen of sequins, having some of the most sparkling tops in nearly every color in the arena. She would replace the buttons with zippers to make them easier to put on.

The 2020 ProRodeo Hall of Fame Inductions are scheduled to take place at 10 a.m. MT on August 1 in Colorado Springs, Colorado.

Article provided courtesy the WPRA. For more information on the PRCA inductees, visit prorodeohalloffame.com and prorodeo.com. For more news and updates from the WPRA, visit wpra.com.

Above: Martha’s last trip to the NFR came in 1998 riding another standout futurity horse, Orange Smash. Owned by Wallace and Lynn Landrum and trained and ridden in the futurities by Charlotte Overton, Martha ended her four decades of NFRs by winning the third round with this run, where the record books show she clocked a 14.02 to outrun another world champion team, Kristie Peterson and French Flash Hawk (“Bozo”).